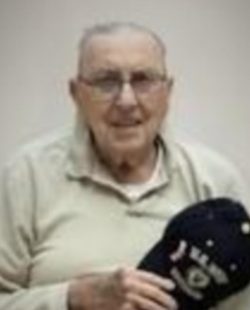 Giarla, Michael Francis of Revere formerly of Boston’s North End passed away surrounded by his loving family on August 13, 2020 at the age of 96. Born in Boston on December 2, 1923 to the late Michael and Consiglia (Melillo). Married for 49 years to his late wife Columbina (DiMaina). Devoted father of Celia Diakogeorgiou and her fiancé Robert Stegmaier of Peabody, Michael J. Giarla and his wife Joanne of Revere, Christopher Giarla and his wife Denise of Revere, John Giarla of Revere, Robert Giarla and his wife Karen of Revere, and the late Richard Giarla. Dear brother of Adeline Ameno and her husband Gennaro of Boston’s North End, and the late Fannie Giarle, Lucy Giarle, Mary Totorici, and Louis Giarla. Cherished grandfather of Sevi Mulcahy and her husband Steve, Julianne Erazo and her husband Hugo, Jennifer Giarla and her husband Michael Salsgiver, Selina Giaquinto and her husband Chris, Christopher Giarla, Joseph Giarla and his fiancé Nicole Lauro, Michael Giarla, Robert Giarla Jr. and his wife Jill, Tiffany Bohen and her husband Brad, Tina Marie Baptista and her husband Gabe, Janine Giarla and her wife Katelyn, and Richard Giarla Jr. Adored great grandfather of Brian, Mila, Michael, Jordyn, JoJo, Jayden, Charley, Vincent, Richie, Brianna, Dominic, Madison, Isabella, Aria, and Olivia. Also survived by many loving nieces, nephews and his best friend Kei Ikeda who visited him daily and now lives in Japan. Michael proudly served his country in the United States Navy as a motor machinist II in WWII and received the World War II Victory Medal, American Area Ribbon, Asiatic Pacific Ribbon 2 Stars, and the Good Conduct Medal. He survived an explosion in the South Pacific on PT boat 110. Mike was a life member of the Plumbers Local 12 since October 27, 1952. He was an avid gardener who enjoyed searching for wild mushrooms and caning his own tomatoes every summer. A proud moment for Mike was when he appeared in the movie “they were expendable” and personally drove General MacArthur as well As John Wayne and his date on the PT boat during filming. His greatest accomplishments were his family. He especially loved them and was proud to be called papa. Due to the current spike in Covid-19, the guidelines issued by the Commonwealth of Massachusetts, Archdiocese of Boston and local officials funeral service will be privately held for the immediate family. Interment Holy Cross Cemetery. In lieu of flowers donations may be made to D.A.V, Room 546 State House, Boston, MA 02133.