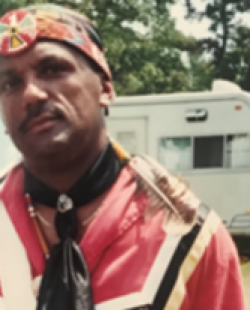 Red Shell aka Clarence Manter Wixon 3rd of Revere began his journey to the happy hunting ground of his ancestors on Nov 17, 2018 in Boston Massachusetts. He was a well respected direct lineal Descendant in the 13th generation of the great chieftain Yellow Feather – or Ousamequin in our native Wampanoag tongue but is known throughout history as Massasoit our Sachem whom befriended the pilgrims in 1620 and was part of the 90 plus Wampanoag Nation contingent to attend the first Thanksgiving in 1621. Mr. Wixon was was born in Boston on Feb 1, 1958 to Chief RedBlanket aka Clarence Manter Wixon Jr, and Pearl A. (Boardley – Lammers) Wixon. He attended Boston Public Schools and resided there until 1975 when he located to New Bedford Mass. In 1985 he returned to the Boston area where he remained until his unfortunate passing. Clarence comes from a long line of prominent and influential local native bloodlines. Aside from his aforementioned “Massasoit” relation – he was also a 12th generation descendant of Sachem Chicatawbut of the Massachuset Tribal Nation for whom the commonwealth derives it’s name. Chief Sagamore Red Shell – Clarence Manter Wixon Sr, a key figure behind the reorganization of the Wampanoag Nation during the 1920’s and 1930’s and baseed in Mashpee was his grandfather. His father was Chief RedBlanket – Clarence Manter Wixon Jr a well renown leader whom was recognized upon his death in 1990 by then governor Michael Dukakis thru a proclamation as one of the greatest losses amongst the Native American community of New England in the previous 50 years. Clarence 3rd was an active member of the native community all of his life. He was a member of the now defunct Algonquin Indian Association of Brockton, the then Boston Indian Council, and the Mass Center for Native American Awareness serving for many years on their advisory council. He was an avid dancer and could be seen at several powwows each season deeply immersed in his craft. Red Shell – Clarence Manter Wixon 3rd is survived by his mother Pearl, his wife Deborah (Orlandino) Wixon of Revere, their sons Gaetano Wixon, Avery Lewis, and Aaron Lewis all of Revere. Clarence Manter Wixon 4th (CJ) of Taunton and Alanda Wixon of Boston with his relationship with Mary Anne Yeager of Boston. Siblings David, Daniel, and Nathan of New Bedford, Donna – (Wixon) Howard of Conway New Hampshire, Darrell and Stephen Wixon of Mashpee, and Chris, Naomi, and Phillip Wixon of Waterville Maine. Funeral services will be at Paul Buonfiglio Funeral Home 128 Revere St on Friday between 5 – 8pm. Additionally a traditional Wampanoag Journey service is being planned for Watuppa Wampanoag Reservation in Freetown Massachusetts.