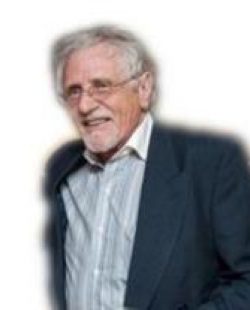 There was never a time when one could not laugh with him, nor a moment that passed when he was short of the perfect word to describe any situation. That’s how friends, family and co-workers most remember Colm Bohill, 69, a long-time partner at the Independent News Group who passed away at Whidden Hospital in Everett Monday night, April 13, after a brief illness. Bohill joined the Independent News Group at its formation in 1999. He was primarily in the Marketing Department, but wore many hats. He often was the first person to greet those coming through the door at the company’s Revere headquarters. However, internally, he was known as a dogged copy editor, who questioned just the right things, knew how to read between the lines, and was the last line of defense against errors and typos before papers went to press and hit the streets. Bohill was born in Waterford, Ireland and spent most of his formative years in Europe before coming to Boston. He brought with him his love of soccer – especially the English Premier League – and of other sports such as the unique Irish game of hurling. He watched both religiously, but he also loved all the American sports, too. Upon arriving in Boston in the 1970s, Bohill worked in the food and beverage industry. Among the places he worked were legendary establishments such as the former Rusty Scupper in Faneuil Hall. After his career in food and beverage service, he came to work in the newspaper industry. He was a quick study and came to love all aspects of the local media publishing world. He was a voracious reader of all things, including the newspapers he helped publish. Because of his Irish roots, he was able to turn on his brogue to delight co-workers, children and friends. He also was very proud of his native country’s athletes, governmental programs and history. Around St. Patrick’s Day, he was liable to tell a fantastic tale of the Old Sod – as he affectionately called it. He travelled back to Ireland at least once a year to see family. He was known to have a good wit, a talent for writing poetry in the Irish tradition and a wealth of wisdom acquired from a lifetime of diverse and challenging experiences. Mixed in with that wit and wisdom was a streak of feistiness, often tinged with a slice of biting humor. On Broadway Revere, and at one time in Central Square of East Boston, he was well known by shopkeepers and area residents in those two places. He made friends quickly and was very personable to those he met in Revere and Eastie, where he manned offices for the newspapers. He had a practical knowledge of how life worked on the streets, but also an intellect that helped him know and love the enlightened ideas of noteworthy philosophers and writers. In his later years, he was smitten by his two young grandchildren, Clyde and Ellis, who were a constant source of pride and happiness. He loved when they visited and cherished pictures he would get over e-mail. He lived on Park Avenue in Revere for many years prior to his passing. He was the son of the late Christie and Mary Bridget Bohill of Waterford. He was the brother of Theckla Ryan, Bernie Rupp, John Bohill and Mamie Lawlor. He was the father of Daniella (Bohill) Gulizia of Colorado and David Bohill. He was the beloved grandfather of Clyde and Ellis Gulizia of Colorado. He was the cherished friend of the DiGregorio Family of Revere. He also leaves many cherished nieces and nephews. Visiting hours will be at Buonfiglio & Sons-Bruno Funeral Home 128 Revere St Revere on Sunday from 4-6 p.m. A Funeral Mass will be said at St. Mary’s Church in Revere on Monday at 10 a.m. Relatives and friends are kindly invited.