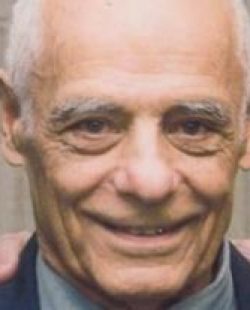 CAPONE~ John D. of Pembroke, NH formerly of Revere, passed away peacefully in Concord, NH after a short period of declining health. He is survived by his wife of 67 years, the former Mary J. Collins of Leesburg, Florida, his son John, wife Marci and their three daughters Brieana, Jonna and Katrina Stoll North Carolina and great-grandchildren Shamsi and Jessi, his son Donald, wife Joanne their son Michael and daughter Jessica of Guilderland, NY and his son Michael of Canterbury, NH, his sister Jean Picardi of Florida. John was born in Lawrence, Massachusetts on May 31, 1921 to William and Florence Capone, but moved to Revere soon after. He called Revere home for more than 80 years before moving to Pembroke, NH in 2005. John was a 1938 graduate of Revere High School, received his Bachelor of Science in Education from Salem Teachers College in 1943 and his Masters Degree in education from Boston University in 1947. John served overseas in Italy from 1943 through 1945 as a weather observer in the United States Army Air Force rising to the rank of Sergeant. He was also a member of American Legion Post 61 in Revere. John spent over 38 years in the Revere and Lexington School systems as a dedicated teacher and assistant principal. He taught social studies at the McKinley School and Revere High School from 1947 until 1963. From 1963 until 1968 he served as Assistant Principal at Revere High School. In 1969 he taught Social Studies at Lexington High School and then served as Assistant Principal at both Diamond Junior High School and Clarke Junior High School in Lexington from 1970 until 1985. Upon his retirement from the educational system, John worked for many years at the Boston Globe in a program that brought the newspaper into area classrooms as a teaching aid. A talented baseball and basketball player at both the high school and college level, John later went on to become the Baseball coach at Revere High School from 1948 until 1963. He also coached the Grahm Junior College baseball team in 1969. He was elected to the Massachusetts Baseball Coaches Hall of Fame in 1991. John also umpired baseball and refereed basketball at both the High School and College level. In 2010, John was elected as an Honorary Member of the College Basketball Officials Association. John was active in the community as a Charter Member of the Revere Little League. He also coached youth basketball and volunteered his time and energy in a number of political campaigns at the local and national level. Funeral from the Paul Buonfiglio & Sons~Bruno Funeral Home 128 Revere St., REVERE, Ma 02151 on Thursday, January 22, 2015 at 9:30am. Funeral Mass in Immaculate Conception Church at 10:30am. Relatives and friends are invited to attend. Visiting hours Wednesday from 4-8pm. In lieu of flowers, donations may be made to the Concord Regional Visiting Nurse Association, 30 Pillsbury Street, Concord, NH 03301. www.crvna.org