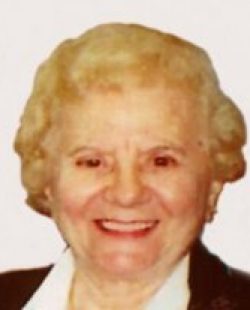 Palermo, Elsie Ann (Pasquale) Age 93, of Revere, passed away on August 4th. Devoted wife for 68 years of the late Joseph A. Palermo. Beloved mother of two sons, Paul A. Palermo & his wife Tina and Edward Palermo & his wife Linda. Mother of a deceased daughter Jay who is survived by her husband, Jim. Elsie’s family includes 7 grandchildren and 4 great grandchildren. Born on 12/23/19, Elsie was the 10th of 12 children who all grew up in an impressive three story house at the top of Prospect Ave in Revere. Her Parents Anthony & Albina Pasquale immigrated from Lapio, Italy in the early 1900’s and wasted little time starting a close knit loving Family who celebrated holidays and special Family occasions in grand traditional style. Food that could feed an Army along with music that lifted hearts graced the Pasquale home on all major holidays. It was not uncommon to find up to 80 Family members and friends celebrating Thanksgiving and Christmas at the spacious home during the 40’s , 50’s & 60’s. Elsie is predeceased by brothers Jimmy, Lawrence & Albert, and sisters Dena, Edith, Esther, Clara, Emma, Helen and Laura. A Brother Anthony, the youngest of the Pasquale dozen, is the sole surviving sibling. A graduate of Revere High School, Elsie, quiet and a bit reserved in large groups was not shy at all displaying her musical talents. She performed in various amateur shows as a singer and dancer in her high school years into her early 20’s. Before her marriage to Joseph Palermo, on leave from the Army in January 1944, she worked in the Charlestown Navy Yard ropewalk factory during WW II when the Navy Yard was producing over 1000 tons of rope each year for the Navy vessels involved in the war fought by “the Greatest Generation”. After her marriage she became the classic homemaker and mother raising her three children on a healthy diet of good choice foods, (except for the occasional Hostess cupcake or twinkie), a guidebook of commonsense courtesy and manners that would have made Ann Landers proud, and whole lot of perpetual love. She was a constant companion and confident when support was needed lending a guiding hand through every rough spot her kids encountered. Like her musician Father, Elsie enjoyed the songs and dancing of the big band era and continued to find time to enjoy her musical pastime’s into middle-age and beyond, donating time as a dance instructor while prodding her offspring to take up dancing and a musical instrument. Later in life, in the empty nest years, she worked for Liberty Mutual Insurance Company. After retirement she contributed a great deal of her free time serving on the Board of Directors of the Revere Society for Cultural and Historic Preservation (RSCHP) and, in addition, had a very active role serving on the Revere Beach restoration committee. The RSCHP was a passion of hers and the friends she made in that organization and accomplishments they attained brought her endless memories and feelings of achievement. Funeral from the Paul Buonfiglio & Sons~Bruno Funeral Home 128 Revere St., Revere, MA on Thursday, August 8, 2013 at 11am. Funeral Mass at Immaculate Conception Church at 12 noon. Relatives and friends are kindly invited to attend. Visiting hours Wednesday from 4-8pm. Interment in Woodlawn Cemetery, Everett. Donations in her name may be made to the RSCHP, 108 Beach St., Revere 02151.