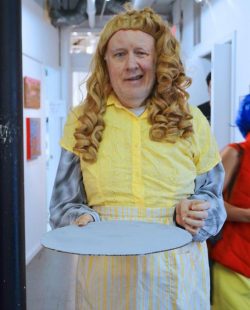 SWIKE, Roger of Revere, May 24, 2020. Son of the late John T. Swike, Beloved son of the late Susanna Swike. Brother of Suzanne Haverty of Hawaii, Stephen Swike of New York, Irene Visocchi of Plymouth, Frances Swike of Hawaii, Ann Swike of Stoneham, Allan Swike of Plymouth, Jane DiZazzo of Maine, Identical twin to Christopher Swike of Rosindale, Philip Swike of Swampscott, and the late Barbara, Mary and Caroline. Also survived by numerous nieces and nephews. Roger was an Artist at the Gateway Arts Studio in Brookline, MA and had been there since 1995. The staff at Gateway were truly exceptional. They loved Roger deeply and presented him with many opportunities to shine. Roger started his artwork as a little child and used it as an outlet to express what was in his mind. Roger had unique interests and abilities as an artist. At any point of the day he could be found with a pen, paper, and crayons in hand. Roger typically worked on no less than three pieces simultaneously moving rapidly, looking off to the side and mapping out the composition with his fingers in the air. Basing his work off a grid, Roger envisioned the entire piece before making a single mark. Roger was fascinated by numbers and had created representational colors and images for the ten numerical digits. Roger had an uncanny visual memory and replicated pop cultural icons, as well as television character names and product logos in his artwork. Once pieces were complete, Roger would arrange multiple drawings into a distinct order, creating new compositions. Roger’s work has been shown nationally and internationally at the Berenberg Gallery in Boston and the Fuller Craft Museum in Brockton, MA; and at the Outsider Art Fair, the Margaret Bodell Gallery and the Phoenix Gallery in New York. Roger also won a MENCAP award in London, England. You can read more about Roger on the online journal ‘Disparate Minds’. Roger lived in Revere at Greentree and was loved by all, in particular, his best friend and caretaker, Murray. Murray had been with Roger for 30 + years, and that is a rare thing in today’s world. Roger lived through 2 kidney transplants, several near death experiences, dialysis, a stroke and more hospital visits than one can count. This past hospital stay was particularly grueling, and the prognosis was not good. He is now in a better place, visiting with Jesus and his Mother, whom he loved dearly. Roger always enjoyed going out to the 99 restaurant in Revere with a few members of his family, several times a year. “Aw, you want a cheeseburger, fries and an iced tea please” was the normal order. Roger loved spaghetti and meatballs, pickles and M&Ms. It was always the simple things that he liked. Roger Dodger will be sorely missed. Due to the Coronavirus, a private graveside service will be held at Woodlawn Cemetery in Everett. Gateway Arts Studio has graciously agreed to hosting a Celebration of Life for Roger once the Coronavirus restrictions have been lifted. All are welcome to join. Information will be posted on https://www.gatewayarts.org/. In lieu of flowers, donations can be made to the Gateway Arts Studio.