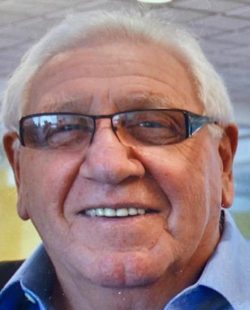 Pallotta, Mario Anthony passed away unexpectedly on March 17th at Melrose Wakefield Hospital of complications from covid. He is survived by his loving wife of 60 years Claire DeCristoforo Pallotta. Predeceased by his beloved son Kenny (Bear) and his beautiful daughter Karyn and three grandchildren Mario, Cameron, and Synclair. He also leaves behind his brothers Anthony (Cosmo), Louis (Bugsy) Pallotta and his caring sister Dolly Gambale along with many nieces and nephews. His predeceased brothers Jimmy and Peter Pallotta. A kind man with an easy smile, his blue eyes lit up every room he entered. Never one to shy away from offering his opinion when asked, his friendships spanned 7 decades. He was a devout family man always spending time with his children and grandchildren. His devotion to his best friend and wife Claire was evident as they were always together, seven days a week over 60 years. An honest man that believed his word and last name were his bond. Tireless, old fashioned work ethic that had him up at 2:30 am six days a week up until his untimely passing to his second home the Produce market in Chelsea MA where he owned and operated M.A. Pallotta Brokerage Co. For over 50 years. He was an avid golfer and a cherished member of Salem Country Club in Peabody Ma. Mario never forgot his passion and affinity for his childhood home, The Italian home for Children where he grew up from his infant years until his late teenage years. Throughout his entire life, Mario was an extremely devoted family man and charitable man with both his time and resources. He always made sure that the Italian home for Children had plenty of produce as well as hosting several charitable events for the home. Visiting hours will be held at Paul Buonfiglio & Sons-Bruno Funeral Home 128 Revere St, Revere on Sunday March 28th from 2:00-6:00 pm. Relatives and friends are kindly invited.Due to capacity limits we ask that you keep your visit brief to allow others to pay their respects to the family. Masks and social distancing are required when entering the funeral home. A Funeral Mass will be celebrated on Monday March 29th in Our Lady of Assumption Church (Lynnfield) at 10:00 am. Please go directly to church. In the spirit of Mario’s charitable nature, his family requests in lieu of flowers, that donations are made to the Mario A Pallotta Trust which has been established for his precious grandchildren Mario, Cameron and Synclair. Mario A. Pallotta Trust C/O People’s United Bank 584 Broadway Saugus, MA, 01906.