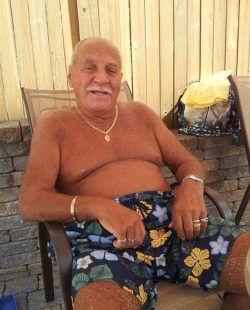 Dominic Angelo Suppa of Revere, formerly of Medford, passed away on April 18, 2020 at the Katzman Center for Living. Dominic was born in Winchester on May 31, 1931, to the late James and Victoria (Stella) Suppa. He was the beloved husband of Marie (Mastrain) Suppa. He was the loving father of Lorraine Suppa of Revere, James Suppa and his companion Maria Misiano of Wakefield, and husband to their late mother Teresa (Polsonetti) Suppa Papa Dominic was the cherished grandfather of Nicholas Suppa of Chelsea. He was the stepfather to Adriana Tringale and her husband Ronald of Rowley.He was the caring brother of the late Mary Falzano, Andrew Diapella, and Frank Diapella. Dominic is survived by many nieces, nephews, and cousins. Dominic attended Bowling Green State University and then served in the United States Air Force. He was a veteran of the Korean War. He went on to work for the United States Postal Service until his retirement.Dominic was known as the yodeling mailman of Cambridge. He was happiest when spending time with family and friends sharing good food and good wine. Dominic loved the beach especially his time spent on the shores of Revere Beach, Florida, and Aruba. He will truly be missed by all. All services will be held privately. In lieu of flowers, donations may be made in Dominic’s name to the Alzheimer’s Association of Watertown, MA or St Jude’s Children Research Hospital of Memphis, TN. . Family and friends are encouraged to leave a message or share a memory in the online guestbook at www.buonfiglio.com Paul Buonfiglio & Sons-Bruno Funeral Home