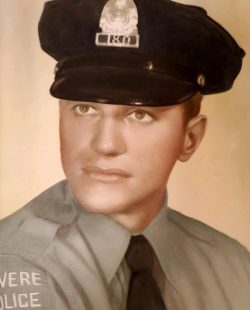 Frederick J. Ambrosino (Retired Lt RPD) of Revere on July 8, 2021 at the age of 98. Born in Boston on December 13, 1922 to the late Alfonzo and Genieve (D’Amore). Beloved husband of 64 years to the late Margaret (Margareci). Devoted father of Paul Ambrosino and his wife Joan of Peabody, and Thomas Ambrosino and his partner Laurie Giardella of Nahant. Cherished grandfather of Brianna, Brittany, and Alexandra. Adored great grandfather of Olivia and Eva Sweezey. Dear brother of Gilda “Gail” Hagstrom of Revere, and the late Mary Alba, Violet Finamore and Phillip, Louis, Anthony and Alphonse Ambrosino. Also survived by many loving nieces and nephews. Frederick was a Revere High class of 1940 graduate. He proudly served his country in the United States Army during WWII under General Patton in the 3rd Army. His group was engaged in battle in the European Theatre and Battle of the Bulge where he would go on to receive the European African Middle Eastern Theatre Campaign Ribbon, Good Conduct Medal, American Theatre Campaign Ribbon, the Victory Medal and the French Legion of Honor Medal. Upon his return to Massachusetts Frederick became a Revere Police Officer retiring in 1987 as a Lieutenant after 35 years of service. He will be sorely missed by all who knew him. A Funeral Mass will be held at Immaculate Conception Church, 133 Beach St, Revere on Tuesday July 13, 2021 at 10:30am (Everyone to meet directly at church). Relatives and friends are kindly invited. Visiting hours are respectfully omitted. Interment Woodlawn Cemetery. In lieu of flowers donations may be made in Frederick’s name to Immaculate Conception Church, 133 Beach St, Revere, MA 02151. For guest book please visit www.buonfiglio.com