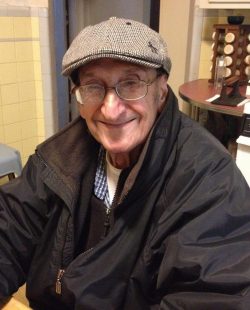 Pisano, Vito Anthony of Revere on October 10, 2021 at the age of 94.  Born in Boston on November 14, 1926 to the late Baldassare and Rose (Sambrone) Pisano.  Beloved husband of Yvonne (LeVie) for 63 years.  Devoted father of John Pisano of Lynn, Clifford Pisano of Revere, Jennifer Pisano and her husband Jerry Lynch of Wilmington, and Robert Pisano and his wife Anica of Brockton.  Dear brother of Marion Kelleher and her late husband Edmund of Lynn, and the late Virginia Perius, Nancy DeMaino and her husband Nicolo. Cherished grandfather of David and his wife Yazmin, Heather and her husband Christopher, John, and Katelyn.  Adored great-grandfather of Gabriella, Emeli, Anthony Vito, and Jessy Jane.  Also survived by many loving nieces and nephews.  Vito proudly served his country in the United States Navy on the USS Pickaway in the South Pacific during WWII where he received the Victory Medal, American Theatre Medal, and Asiatic- Pacific Theatre Medal.  After the military, he attended barber school and received his license.  He cut hair in Dorchester and Orient Heights for some time until working for Hertz as a service technician for 25+ years until retirement.

He enjoyed big band music, listening to Frank Sinatra and Dean Martin, as well as the sport of horse racing, spending some of his free time at Suffolk Downs.  He loved to cook, especially making his homemade pizza which family and friends enjoyed. He had such a generous giving nature where at times he would prepare food and give to those in need down Revere Beach. His family enjoyed hearing the stories of his past, especially the one where he had a couple of chance meetings with JFK who was a US rep at the time. When Vito returned home from military service he was hitchhiking back home to East Boston through the tunnel when he was given a ride from JFK not once but on two separate occasions. He must have left an impression after the first ride because JFK recalled that he had given him a ride one time prior.  He will be truly missed by all who knew him.  A Memorial Visitation will be held at the Paul Buonfiglio & Sons-Bruno Funeral Home 128 Revere St, Revere on Saturday, October 23, 2021 from 2:00pm to 5:00pm followed by a Prayer Service at 5:00pm. Relatives and friends are kindly invited.  A private interment will take place at the Massachusetts National Cemetery in Bourne.  In lieu of flowers donations can be made to The Greater Food Bank of Boston, 70 South Bay Avenue, Boston, MA 02118 or at gbfb.org.  For guest book please visit www.buonfiglio.com.  To live stream visitation and Prayer Service   https://my.gather.app/remember/vito-pisano