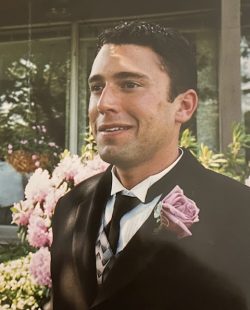 Daniel “Dan” Sasso , an entrepreneur, born in Boston in 1972. A longtime Revere resident, he passed suddenly at home on December 9, 2021. Daniel is the son Leonard and the late Sandra Sasso.  He had a special relationship with parents whom he loved dearly. We are all certain that Sandy is giving him a hard time as you read this, while Dan is giving it right back.  He is the godson of the late Judith Damore (they were each other’s favorite) and survived by her daughters Anna and Renee who were like big sisters to Danny growing up.  He is survived by his brother Dennis.  They had a lot of fun, laughs, good times and great brotherly fights while growing up on the Sasso compound at Grand Ave in Revere.  Cousin David Sasso would organize the games and break up the fights when it was dinner time at Nana’s.  Dan is the grandson of the late Louis & Grace (Orlandella) Sasso as well as the late Veteran George & Edna (Harkins) Kennedy. He also survived by Aunts and Uncles in the Sasso Family – Christine, Patty, Mary, James,  Louis and Kevin. He was a favorite and loved his cousin Maureen Kidney.  He had many great friends over the years especially Shannon Doherty, Zane Bell, Amy Tuttle Petipas and Amy Aurigemma McManus as well as Steve DiPrima.  Dan was the father of the late great Dachshund dog Maxie.  He taught her to roll a beach ball at high speed, despite that she was just 8 inches tall.  He would love to see other people’s reaction to the show.

Dan learned to ski at 5 years old, took many 1st places in junior showmanship with his mother’s Golden Retrievers as a child and teenager.  One of Danny’s greatest abilities was to dance.  He was a star for many years at Agnes Strecker Dance Studio.  An entrepreneur, Dan ran a very successful retail business based in Faneuil Hall with other locations in Rockport, North Conway, NH and various malls.  His style and ability to create creative displays helped drive the business.  Other shop owners would marvel at Dan’s window displays. Dan had an unusual zest for life and passionate about surrounding himself with the aesthetics of design.  This includes the artifacts that he collected throughout his life.  He treasured them as much as his friends and family.  He shared this trait with his mother Sandy.  Danny was sharp dresser his entire life. Dan lived by his own rules and designed his world for maximum enjoyment. Dan loved comedy TV and Movies. Watching with him always made the shows seemed funnier from his constant laughter.   He loved to entertain friends and was able to find humor in any unusual situation. Often, he was the source.  The life of the gathering, the first to arrive the last to leave and one who made fun of the most people there. Let Dan always bring a smile to your face when you think of him.  Be sure it was time when the two of you laughed.  Be happy for your time together as Dan is at now at peace. A graveside servce only will be held at Woodlawn Cemetery, Everett,  Monday, December 20 at 11 AM.  Friends and Family are invited.   Flowers should be sent to the Buonfiglio Funeral Home or donations can be made in Dan’s name to the Yankee Golden Retriever Rescue Foundation at ygrr.org