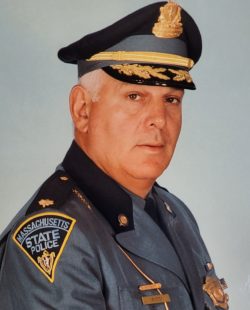 Major Michael C. Mucci (Retired) of Revere and Winthrop passed away on Friday, January 28, 2022 after a long battle with cancer.  Michael was the son of the late Alfred and Gemma Mucci.  He was a loving and devoted husband and proud father and grandfather.  Michael is survived by his wife, Mary Ellen and his children, Michael Mucci Jr. (Erin) of Adams, Gregory Mucci (Kristen) of Arlington, and Kristen Mucci of North Andover and his stepson, Gregory Hamilton of Osterville.  Cherished grandfather of Jake and Griffin Mucci, Dennis and Sammy Sherlock, Brooklyn, Luke and Logan Mucci and Austin and Dylan Hamilton.  He was one of five children: Guy, Mary Lou, Alfred & Richard (all deceased).  He leaves behind many nieces and nephews.  Michael was born in East Boston and moved to Revere at an early age where he spent over 50 years before moving to Winthrop.  He graduated from Revere High School and went on to attend Boston College where he graduated in 1972 from the Carroll School of Management. Michael earned his M.S. in Public Administration from Suffolk University Graduate School of Administration in 1976. While at BC, he played football and earned all-New England, All East and honorable mention All-American awards.  He was the first president of the BC Gridiron Club, past president of the BC Varsity Club and inducted into the BC Athletic Hall of Fame.  Michael was a 33 year veteran of the Massachusetts State Police, joining the force in June of 1974 as a proud member of the 58th RTT and began his career as a Road Trooper in Troops “A” and “E”.  From 1979 through 1982 he served on the staff of Governor Edward J. King in the Executive Protection Unit.  Michael then served in the State Police Detective Unit and was promoted to the rank of Corporal, and later the rank of Sergeant assigned to Troops “A”, “GHQ” and “F” in 1989.  As a Lieutenant he became the first Station Commander from the Old State Police to take command of the “A-4”, SP Medford Station from 1994 – 1996.  In 2000 Michael was promoted to Captain, and then in 2002 was promoted to Major, Commanding Troop E, assigned to the Massachusetts Turnpike Authority.  As an additional duty he was also the Chief Law Enforcement Officer for the Central Artery, Harbor Tunnel Project (The Big Dig)!Major Mucci was the principal architect of the Massachusetts Turnpike Incident Response Plan, the Traffic Division Plan for the Democratic National Convention in 2004 and an Incident Commander for Boston Bio in 2007.  From 1980 to 1990, Michael was the Field Director of the Revere Pop Warner Youth Football Program and an assistant football coach at Revere High School through 1992.  He coached girls softball teams from 1990 – 1998.  Michael also enjoyed his years as an ice hockey referee in the American Hockey League and Hockey East and in 1990 he refereed the Division 2 National Collegiate Ice Hockey Final.  Michael was a member of the Winthrop Golf Club and a member of a number of Police Associations.  A Visitation will be held at the Paul Buonfiglio & Sons-Bruno Funeral Home, 128 Revere St, Revere on Friday, February 4, 2022 from 3:00pm to 7:00pm.  At the request of the family, masks must be worn upon entrance into the funeral home and please refrain from hugging and hand shaking.  Relatives and friends are kindly invited.  A Funeral Mass will be held at St. Anthony’s Church 250 Revere St, Revere on Saturday at 12:00pm (everyone to meet directly at church).  Private Interment.  In lieu of flowers, we ask that donations  be made in memory of Michael Mucci to support the Caring for a Cure Fund at the Mass General Cancer Center. https://giving.massgeneral.org/donate/.  Please select “I am making this gift in honor or memory of someone” and indicate “Michael Mucci”.  Checks made payable to Massachusetts General Hospital can be mailed to: MGH Development Office C/o Megan Daniels, 125 Nashua Street, Suite 540, Boston, MA 02114-1101.  For guest book please visit www.buonfiglio.com.