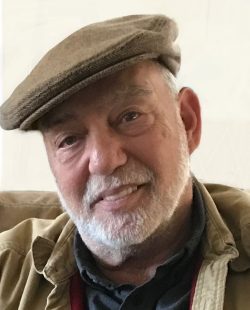 John J. Gueli of Pembrook, NH passed peacefully on April 7, 2022 with his wife by his side after a courageous battle with lung cancer and congestive heart failure. John was born in East Boston, Mass. on September 8, 1946. Son of Joseph J. Gueli and Helen (Pauletti) Cammisa both of Boston, Mass. John attended school in East Boston and graduated from East Boston High School in 1965. He attended classes at North Eastern University in Criminal Law and later became a part time police officer in Revere, Mass. Being a member of the motorcycle unit, John had many opportunities to work parades for the Middlesex County Sheriff’s Department as well. While working part time for the Revere Police Department, John was able to take over his father’s restaurant, Sir Rocco’s Pizza, due to his father’s failing health. While a police officer, John also owned and operated Advance Auto Exchange in Everett Mass. Branching out in the automobile service industry, John later owned and operated the Parkway Amoco station in Arlington and the Wellington gas station in Weymouth Mass. During this time John also purchased a limousine and started his own business working for local funeral parlors, as well as weddings and proms around the area. In 1990, John moved to Shorter Alabama where he resided for 13 years. He attended the Police Academy in Alabama to become a Fire Arms Instructor where he became a marksman in the field, taking first place in many competitions around the country. He taught firearms instruction for the police academy for many years. While in Alabama, John served 10 years as a homicide detective for the Tuskegee Police Dept. After a 35 year career in police work, John retired after three years of service as the Assistant Chief of Police of the Notasulga Police Dept. in Alabama. Shortly thereafter, John returned to New England, residing in New Hampshire in his later years. Throughout his career John received many honors and merits. Many times going above and beyond the call of duty of a police officer. For years, John would donate Thanksgiving dinners, turkeys and all the fixings, to many underprivileged families in the area. He felt a strong calling to help out whenever and wherever he could. John had a lifelong passion for boating. He owned a variety of boats over the years, boating out of Boston Harbor, Cape Ann Marina, Ward Marina, Lake Winnipesaukee in NH, and Greg Marina in Alabama. Many summer days and nights were spent on his boats entertaining friends and family. His last years were spent boating on Lake Ossippee in Freedom NH where he owned a summer camp at Totem Pole Park. Boating around the lake on his pontoon boat with family and friends brought him great pleasure. He loved being on the water more than anything. John also had a lifelong passion for his many pet dogs. At one point he cared for 9 dogs on his 30 acre property in Alabama. His true soul mate was his dog Busta who he rescued as a puppy. Busta became blind at 18 months old and with Johns loving care and attention he lived to be 21 years old. John was also an avid card player. Throughout the years John spent many nights playing Poker with his family and friends. He was notorious for winning the “big pots.” Needless to say he knew the game very well! Later in life John met his wife, Judith Green. Together they had a passion for ballroom dancing and had the opportunity to perform at charity events held by The Lets Dance Studio in Concord, NH. They also enjoyed dancing at numerous dance party balls, and other ballroom dance venues around NH. Tango was their dance! John leaves behind his wife, Judith Green and their rescue dog Foxy. His step daughters Holly Holmes and her husband Nate of Warner NH. Rebecca Stock and her husband Tyler of Hopkinton NH. His step grandchildren, Lilliana and Zoey Holmes and Cohen and Autumn Stock, whom affectionately called him “Grampa John.” Two nieces, Mia Dixon and her husband Jason, and Joya Shaheen and her husband Michael both of Bedford NH. One great nephew Chase Baroody, three great nieces, Ivy Dixon, and Gianna and Helena Shaheen, and one great, great nephew Grayson Baroody, all of Bedford NH. His sister in law Lynn Green and partner Doug Hayes of Forrest City, NC and brother in law Burton Green and wife Betsy, of Manchester NH. Close cousins, Christine, Terry, Carla, Sandy, Anthony, and Michelle, and best friend Glen as well as many more cousins and close friends. John was predeceased by his parents and step father Anthony “T” Cammisa, and his sister Teresa Wallwyn and brother in law, Wally. John will be remembered for his incredible story telling skills, his quick wit, his extravagant Halloween parties, and larger than life personality. He was truly one of a kind, and as the song goes, “I Did it My Way,” and he absolutely did! A Memorial Visitation will be held at the Paul Buonfiglio & Sons-Bruno Funeral Home 128 Revere St, Revere on Saturday, April 30, 2022 from 9:00am to 10:30am followed by a 11:00am Funeral Mass at St. Anthony’s Church in Revere. Relatives and friends are kindly invited. Inurnment Woodlawn Chapel Niche. In lieu of flowers, donations can be sent in Johns name to Vested Interest in K9s, Inc. whose mission is to provide state of the art bullet proof protective vests and other assistance to dogs of law enforcement throughout the country. For guest book please visit www.buonfiglio.com