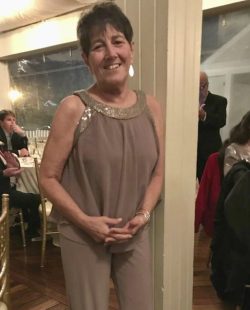 Dorothy O’Leary, passed away suddenly on June 21, 2022. Dorothy grew up in East Boston and moved to Revere after marrying.  It was on True Street in Revere that neighbors quickly became her family. Dorothy became well known in Revere after working at Revere High School in the Lunch Room  as well as the Teachers Room for many years. Dorothy would celebrate any kind of holiday with decorations, costume, a smile on her face and of course treats for everyone. She was also known for her crocheting and would crochet an afghan any chance she could. Dorothy enjoyed spending summers in Maine with her sister and family. Dorothy was the daughter of the late Richard Louis and Veronica (Palladino) Granese. She was the wife of the late John O’Leary .Beloved sister of Patty Blaikie and her late husband Robert of Hingham, Clem Juirdano and his wife Mary of NJ,   Cherished aunt of Doris Blaikie McCann of Hingham, Bobby Blaikie and his wife Maria of Danvers, Kimberly  Mancarella and her husband Pierpaolo of NJ, Great aunt of Richard  McCann and Ashley of NY, Bobby Blaikie of Danvers, Anna Blaikie of Boston, Emma McCann of Hingham. Great great aunt of Isabella McCann, Sebastian, Christopher, and Luca. She will be greatly missed by all  of her family and friends.