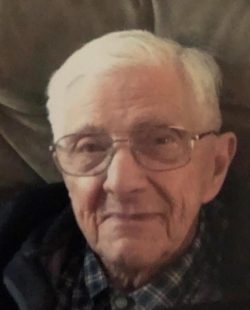 Pasquale J. Allouise (Pat), 96, of Revere, passed away on Friday, March 6 at home. Pat was born on June 24, 1923 in the North End of Boston to the late Joseph and Barbara Allouise. Pat worked for many years as a foreman at the American Optical Company in Chelsea. He was married to the late Emma (Yonker) Allouise, who predeceased him just over one year ago. Pat and Emma settled in Revere, raised a family, and were married for over 70 years. Pat’s joys in life included his family, walking at either Revere Beach or the Square One Mall, watching sports and game shows on television, going to horse races at Suffolk Downs and playing the Numbers Game of the Massachusetts State Lottery. In addition to his deceased wife Emma, Pat was the devoted father of John Allouise and his wife Marie of Mississippi, Donna Allouise and Patricia Allouise, both of Revere, and Joseph Allouise and his wife Ruth of Beverly. Cherished grandfather of Nicole Surette and her husband Ronald of Saugus, Jacqui Allouise of New Hampshire, and Isabella Allouise of Beverly. Cherished great grandfather of Tiffany and Alex Surette of Saugus. Dear brother of the late Catherine (Allouise) DeStefano and her late husband Salvatore of New Hampshire and the late Peter Allouise and his late wife Florence of Revere. Also survived by many loving nieces and nephews. Funeral from the Paul Buonfiglio & Sons-Bruno Funeral Home 128 Revere St, Revere on Wednesday at 10:00 a.m. and a funeral mass at St. Anthony Church at 11:00 a.m. Relatives and friends are kindly invited. A visitation will be held on Tuesday, March 10 from 4:00 p.m. to 7:00 p.m. Interment in Woodlawn Mausoleum. In lieu of flowers donations can be made to the American Heart Association at https://www.heart.org/en or via mail to American Heart Association/American Stroke Association, PO Box 417005, Boston, MA 02241-7005.