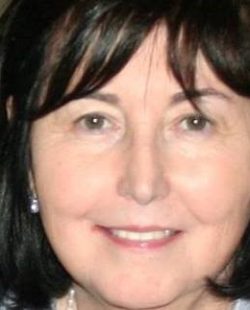 Marianne, of Brookline, MA passed away on August 30th after a brief battle with cancer.  She was born on August 18, 1947 in Pittston, PA. She was the daughter of Andrew C. McGowan (longtime Principal of Avoca, PA, High School) and Teresa Scott McGowan, an elementary school teacher in Pittston, PA. She was raised in Avoca, PA and was a graduate of St. John’s High School in Pittston. She graduated from Marywood College in 1969.  She received a Masters Degree in education from Boston University in 1972 and a Master’s Degree in Library Science from Simmons College in 1988. She worked as a School Librarian in Scranton, PA. Later, she worked at Lesley University and retired as a School Librarian from Norwood Coakley Middle School.

She is survived by her husband of 34 years, Richard Scaramozza.    She is also survived by her nephew, Andrew S. McGowan Jr, his wife, Katy, and their daughters Isabella, 15, and Ariella, 12 of Woodlawn, Bronx NY. She was predeceased by her brother, A. Scott McGowan, PhD, and his wife Marian of Yonkers, NY.  In addition, she leaves many cousins in PA,NY,NJ,MD,VA,NC,TN,IL,FL,DC,TX,NM,AZ,CA,UT, and IL.

Marianne was a very proud graduate of Marywood and cherished those years and the many long lasting  friendships she made.  She also cherished her lifelong friends from St. John’s High School. There will be a celebration of Life for Marianne at the Buonfiglio Funeral Home in Revere, MA on Thursday Sept. 15th from 4-8pm.  There will be a funeral mass at St. Ignatius of Loyola on Friday, Sept. 16th, at 2pm.  In Lieu of flowers, the family asks that donations in her name be made to Marywood University in Scranton, PA.