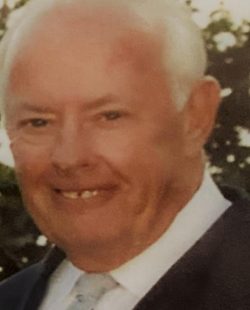 It is with great sadness that we announce the sudden passing on Wednesday March 4, 2020, of William “Billy” Irving Hazel aged 76. He died of complications from heart surgery in Del Ray Beach, Florida where he resided for the last few years. William was born on St. Patrick’s day in 1943 in Revere, MA. To the late Arthur Irving Hazel and Mary Frances Hazel of Revere. Billy graduated from Revere High School in 1962. After graduation, he was drafted to Vietnam where he was stationed in Okinawa, Japan. Upon returning to the United States, his brother Jackie helped his younger brother get a job where he began his long career as a civil engineer with Massachusetts’s Public Works. He was a long time member of the Winthrop Golf Club and Salem Country Club. Billy will be remembered as “Tootsie” by many of his closest friends for his colorful outfits and style. There was no color off the table when it came to his wardrobe…the brighter the better including his socks and hats. He always looked dapper where-ever he went always showing up early to gatherings never wanting to miss the action. Billy started most conversations with a new joke which he loved to share to get friends and family laughing. He truly enjoyed his social life with close friends, his longtime companion Susan, golfing, weekly Saturday lunches in the North End with his compadres, and many trips to Saratoga and Florida Super Bowl celebrations. He was extremely proud of his children enjoying many holiday gatherings together with them. As his family grew, he enjoyed attending his grandchildren’s sporting events to cheer them on. The last few years, his health had started to decline making it more difficult to stay active. He leaves behind his loving companion of many years, Susan Perry. Loving father to Michael Hazel, Lucille Freddo and her husband Domenic, Marc Hazel and his wife, Heather and their wonderful mom, Jacqueline LaBella Hazel. Proud grandfather to Mia Freddo, Chloe Freddo, Ryan Hazel, Fiona Hazel, and Beckett Hazel. Loving Brother to John “Jackie” Powers of Revere and Sheila Pike of Lynnfield. He left behind many relatives and friends, too many to list. Relatives and friends are respectfully invited to his viewing on Monday March 9th, 2020 from 4 – 8 pm at Buonfiglio Funeral Home 128 Revere St.,Revere, MA. Funeral services will be held at Buonfiglio Funeral Home at 9:00am on Tuesday, March 10, 2020. Funeral Mass at St. Anthony’s Church on 250 Revere St., Revere, MA commencing at 10:00 am followed by internment at the Holy Cross Cemetery in Malden.