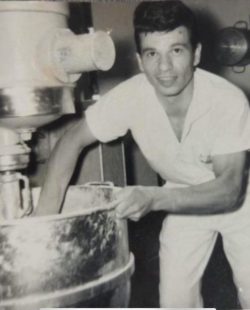 Joseph Esposito, of Revere, formerly of Everett, unexpectedly at his home on October 16, 2022. Born and raised in Siano, Salerno, Italy to the late Giovanni and Carmela (Riccio) Esposito. Beloved husband of Ursula (Barone). Devoted father John Esposito and his wife Bettina of Peabody, Ralph Esposito of Somerville, Carmela Esposito of Siano, Salerno, Italy, Fiore Esposito and his wife Karissa of Methuen, Michael Esposito and his wife Alexandra of Revere, Joseph Esposito of Revere, Victor DAmore and his wife Angela of Peabody and the late Mario DAmore. Dear brother of Anna Esposito of Salerno, Italy, Grace Botta of FL, and the late Ralph Esposito. Also survived by 7 loving grandchildren and 2 great-grandchildren. Joe came to the U.S as a teenager, initially settling in Everett before moving to Revere in the early 1990s. Joe was a baker for many years, working his craft at Brandano’s Bakery in Revere and Royal Bakery of Cambridge. In his free time he enjoyed going to the races at Suffolk Downs and meeting up with friends. Funeral from the Paul Buonfiglio & Sons-Bruno Funeral Home, 128 Revere St, Revere on Friday, October 21st at 9:00 am followed by a Funeral Mass at St. Mary of the Assumption Parish (Revere) at 10:00 am. Relatives and friends are kindly invited. Visiting hours will be Thursday 4-8 pm. Interment will be in Holy Cross Cemetery. For guestbook, please visit www.Buonfiglio.com