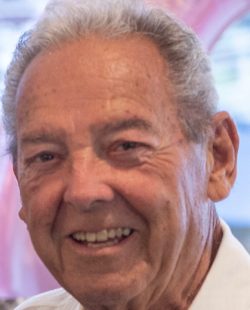 Melvin J. “Mel” Massucco, Jr. , of Revere, formerly of East Boston, passed away January 17, 2023 at the age of 83. Beloved husband of 61 years to Florence A. (Cambria) Massucco. Devoted father of Melvin J. Massucco III and his wife Donna of Revere and Susan Shaffer and her husband Wayne of Lynnfield. Cherished Papa of Melissa Massucco, Tyler Shaffer, Matthew Massucco and his fiance Elizabeth Agneta, Dylan Shaffer, Crystal Shaffer and great-grandfather of Dominick Massucco. Dear brother of the late Richard Massucco and his surviving wife Ronna. Brother-in-law of late Pasquale “Sonny” Cambria and his surviving wife Ruthie. Brother-in-law of Anna Cambria and her husband Tony Rembis of NJ. Also lovingly survived by his nieces, nephews and friends.

An Air Force veteran, Mel proudly served his country during Vietnam. He worked for many years as an electrical designer with Polaroid. He was a former coach for Revere Youth Hockey. He also was a member of the D.A.V. and the Crystal Community Club in Wakefield. While he enjoyed golfing and visiting the local casinos in his freetime, spending time with his family brought Mel the most joy of all.

A visitation will be held in the Paul Buonfiglio & Sons ~ Bruno Funeral Home, 128 Revere Street, Revere on Sunday, January 22, 2023 from 2 – 6 PM. Relatives and friends are kindly invited. A funeral will be held from the Funeral Home on Monday, January 23, 2023 at 9 AM followed by a Funeral Mass in St. Mary of the Assumption Church, 670 Washington Ave, Revere at 10 AM. Interment in Woodlawn Cemetery, Everett. At the family’s request, in lieu of flowers, donations may be made in Mel’s memory to the Disabled Veterans of America at https://www.dav.org/ways-to-give/. For guestbook, please visit www.buonfiglio.com