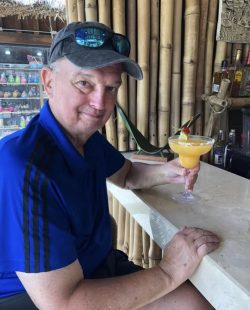 Patrick Draper, of Amesbury, formerly of Revere, passed away on January 21, 2023 after being diagnosed with end stage cancer at the age of 69. He was born July 22, 1953 to the late Frederick and Irene (Mulvey) Draper. Beloved husband of Marianne (Dragani) Draper with whom he would have shared 50 years of marriage in February. Cherished father of Heather Draper and Patrick Draper, Jr. and his wife Romilda. Adored Papa of Alana and Rocco Kokinacis and Dylan and Tyler Draper. Dear brother of Edward Draper and the late Frederick Draper, Jr. and the late Marianne Nicolo. Also survived by many loving and caring family and friends.

Patrick grew up in Revere and lived in Revere most of his life. He and his wife Marianne moved to Amesbury 19 years ago. He was very friendly and always the first person to talk to someone. The party never started until Pat arrived. He was adored by his friends and family. Family was Pat’s passion, especially his grandchildren. He was always there day or night for anyone that needed anything. He was caring, kind and fun loving. Patrick worked for Polaroid for over 30 years and was retired Army National Guard with 28 years of service.

A visitation will be held at the Paul Buonfiglio & Sons ~ Bruno Funeral Home, 128 Revere Street, Revere on Wednesday, January 25, 2023 from 9:30 – 11:30 AM. Followed by a Funeral Mass in St. Anthony’s Church, 250 Revere Street, Revere at 12:00 PM. Interment in Woodlawn Cemetery. At the family’s request, in lieu of flowers, donations can be made in Pat’s memory to the National Coalition for Homeless Veterans at https://nchv.org/ways-to-give/. For guestbook, please visit www.buonfiglio.com