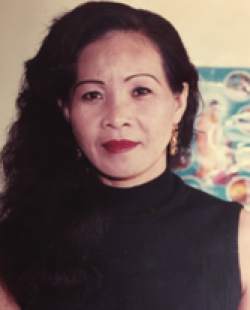 Gina Chhin Neang, 64, passed away on Friday, January 17, 2020. She was born May 5, 1955 in Takéo Province, Cambodia. In 1981, Gina had to flee Cambodia to Thailand to escape the war caused by the Khmer Rouge. She had two sons which both passed at a young age. In Thailand, she stayed at a refugee camp called Khao-I-Camp. Many Cambodian refugees came to America between 1975 and 1994. She got sponsored and came to America in 1989. She lived in Washington State for quite some time until she found out her eldest sister was living in Boston, MA. She decided to move close to her family where she resided in Revere, MA permanently. Gina is known in her community and active with the Revere Buddhist Temple. She wanted to become an American and got her citizenship a few years ago, at which point she changed her name to Gina. Her family calls her Hoeun while everyone else in the community knew her as Sinoun. Gina, strived very hard and worked as much as she could for a better life. She was very independent and strong willed. She loved life but sadly it was cut short due to health problems. Gina is survived by her eldest sister, Mom Chhin and her husband and niece Sina Mao. A visitation will be held at the Paul Buonfiglio & Sons ~ Bruno Funeral Home, 128 Revere Street, Revere on Saturday, January 25, 2020 from 8:00 – 9:30 AM followed by a prayer service at 9:30 AM.