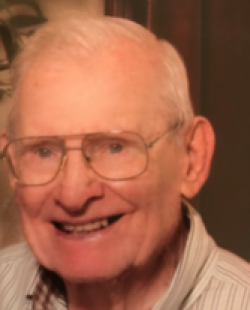 David J. Allan, 98, formerly of Revere, MA and Gilford, NH, passed away peacefully on Thursday, December 19, 2019 at The Beach House Assisted Living in Naples FL with his wife by his side. David and Jean (DeMauro) Allan had recently celebrated their 75th wedding anniversary with some of their family and friends. Born in Malden, MA on November 11, 1921, he was the son of the late John W. and Evangeline (Rice) Allan. He graduated from Malden High School and enlisted in the Marine Corps in October 1939. After receiving basic training he was deployed to Guantanamo Bay, Cuba for specialized training and for the formation of the 1st Marine Division in February 1941. Advanced training at Quantico, VA and Parris Island South Carolina was the prelude to machine gunner training in New River, NC in September 1941. Promoted to Line Corporal in March of 1942, he was shipped out to the Pacific to Wellington, New Zealand for rehearsal landings for island battles in the Solomons. David landed on Guadalcanal on August 7, 1942 and participated in the Battle of the Tenaru, Edson’s Ridge, Matanikau River, and Henderson Field. He was then deployed to Australia in February 1943 to assist in the training of new troops for additional island offensives. He was relocated to Parris Island in June of 1944 then relocated to the Boston Navy Yard in January 1945 where he received an Honorable Discharge. After leaving military service David worked for the Gillette razor blade company as a machinist and attended Northeastern University on a work study program and received his Bachelor’s and Master’s degrees in Electrical Engineering. He joined the Massachusetts Electric Company and retired in 1986 as Manager of Consumer Services in Malden handling new requests for electric service by commercial and industrial customers. David served as the company representative in the communities served by Mass Electric and was very active in the Everett Rotary and various Chambers of Commerce. David was preceded in death by his parents, two brothers Charles H. Allan of North Reading and Robert Allan of Worcester, and a sister Constance B. (Allan) DeFabio of Melrose. He is survived by his wife, Jean N. Allan, a daughter, Linda J. Allan, a daughter-in-law Pamela J. Comer, and several nieces and nephews. A visitation will be held at the Paul Buonfiglio & Sons-Bruno Funeral Home 128 Revere St, Revere on Saturday, December 28, 2019 from 10:00am to 1:00pm followed by a 1:00pm Prayer Service. Interment Woodlawn Cemetery.