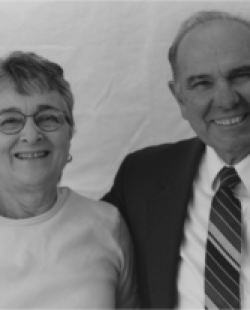 Ruberto, Isminy (Fanikos) of Revere passed away on September 14, 2019 surrounded by her loving family at the age of 91. Her devoted husband of 55 years, Frank A. Ruberto, passed away one week later, on September 21, at the age of 90. Isminy was born in Boston on February 16, 1928 to the late Gregory and Louise (Papavrami) Fanikos.  Frank was born in Revere on December 26, 1928 to the late Carmelo and Mary (Manconi) Ruberto. Lifelong residents of Revere, Isminy graduated from Revere High School in 1946, and Frank graduated from Boston College High School in 1947 and Boston College in 1951. Isminy worked as a secretary in the Revere High School Principal’s Office from 1946 to 1970. In 1978, she returned to the School Department as a secretary to the Superintendent of Schools, retiring in 2009. Frank became a science teacher at RHS in 1951, and was appointed Director of Science in 1968, retiring in 1991. A dedicated teacher and administrator, Frank was a tireless advocate for science education for the children of Revere. Isminy was known throughout the Revere School system for her intelligence, her work ethic, and her warm and sunny personality. Both Frank and Isminy were recognized as kind and generous souls and were beloved by generations of students, staff, and faculty. In retirement Frank and Isminy enjoyed spending time with friends and family, especially their grandchildren. Isminy and Frank were the devoted parents of Charles Ruberto and his wife Sarah Gore of Arlington, Christine Berentsen and her husband Richard of Los Angeles, and Diane Frey and her husband Michael of San Diego.  Cherished grandparents of Chiara and Gabriela Ruberto, Brock Berentsen, and Max Frey. Isminy was the dear sister of Elli Catalucci and her late husband Aldo of Revere, James Fanikos and his wife Florence of Melrose, Antigone Love and her late husband Robert of Merrimac, Victor Fanikos and his wife Aphrodite of Danvers and the late Dr. Peter Fanikos and his surviving wife Elizabeth (Lee) of Ipswich. Also survived by many loving nieces, nephews and cousins.  A visitation for Frank and Isminy will be held at the Paul Buonfiglio & Sons-Bruno Funeral Home, 128 Revere St, Revere on Saturday, September 28, 2019 from 9:00 AM to 10:15 AM followed by a joint funeral service at St. George Greek Orthodox Church in Lynn at 11:00 AM. Fr. George will lead the service. In recognition Frank’s faith, Fr. Xavier of St. Anthony’s Roman Catholic Church in Revere will participate.Interment will be Woodlawn Cemetery. In lieu of flowers, donations may be made to a charity of your choice. For guestbook, please visit  www.buonfiglio.com.