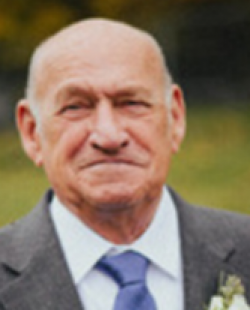 Gloucester, MA – Ronald C. Esty, husband of Kathleen H. (Mc Gillivary) Esty went home to the Lord on September 16, 2019, at Seacoast Nursing and Rehabilitation Center of Gloucester. Ron was born on July 12, 1934, to the late Ralph and Mable (Dorey) Esty. He attended Gloucester schools, graduating from Gloucester High School in 1953, shortly thereafter Ron enlisted in the army. After eight weeks of basic training at Fort Dix, New Jersey and continued training at Fort Riley, Kansas for field- wireman training, using his training for radio repair was stationed in Germany for a year. After which he received an honorable discharge in 1955. Ron’s childhood was spent on the top of Commonwealth Ave, where he lived on Alpine Court with his parents and only sibling Joyce. Ron had lots of fun getting into mischief with his lifelong best friend Richard Movalli and the rest of the Movalli brothers. Over the years Richard (Rit) and Ronnie took many trips together, especially to Maine for ice-fishing. They spent a lot of their days and nights at the State Fish Pier, spinning fish tales and just enjoying special times together. Ron held numerous job positions over his lifetime, but his favorite job was working in the maintenance department at Addison Gilbert Hospital where he worked for over 30 years, making many friends including Mike, Joey, Jack, Buddy, and many others. Ron had a lot of hobbies. He enjoyed wood working, refinishing furniture, making one of a kind gifts for friends and family members. Ron enjoyed playing cribbage with his friends on Monday night cribbage team at the Gloucester Fraternity Club. He was also an awesome dart player, loved a good ping pong match, and playing pool. He loved spectator sports. His favorite was a good tennis match, he was a real fan of Roger Federer and Serena Williams, enjoyed watching a good game of golf with Tiger Woods, loved the Patriots, and the Red Sox. But his favorite past time was spent with family. Every night Ron would look forward to watching Wheel of Fortune and the Great British Baking Show with his sister Joyce who lived upstairs from him. He thoroughly enjoyed spending time with her continuing a special bond they had since childhood. Ron loved Gloucester, the water front, the Boulevard, and the Back Shore. He enjoyed going out on his 16 foot Bayliner, whale watch trips, deep sea fishing, and reel & rod fishing at the State Fish Pier. He had strong ethics, integrity, a man of his word, honest decent, and kind. He loved being home watching television, reading a good book, and enjoying a good home cooked meal. He also loved his late night trips to the kitchen for his snacks. Ron’s passing has left the world less bright. Beside the love of his love, Kathy, Ron is also survived by his children Cameron O. Martinez, Jesenia K (Martinez), her husband Dylan Girard, Jaelyn A Martinez, Erin Martinez – Johnson, Timothy Esty, Ronelle Esty, grand children Laura, Cassidy, Kaola, and Altonie, many great grandchildren, his favorite cousin Bobby among other cousins. Ron is also survived by brother-in-law Joseph McGillivary of Haverhill, sister in law Deborah and her husband Joseph Grace of Gloucester, Kenneth F McGillivary Jr, of Acton, ME, Karen J Knowles of Merrimac, Elizabeth A and her husband Daniel McDougal of Gloucester, Marilyn F and her husband Gordon Goveny of Gloucester, and James M McGillivary of Gloucester. He is also survived by his sister Joyce’s children, nephew Stephen Muise and his wife Chris of Essex, a very special niece Audrey Brancaleone and her husband Joseph of Gloucester, nephew Michael Vestal and his wife Jeanie of South Carolina, and numerous great nieces and nephews. Ron leaves behind his beloved dogs Bailey and Zena, who are still waiting by the door for his return. Ron will be excited to start walking Oreo again, his dog and best friend who left this world to soon. In lieu of flowers, please show a kind gesture or pay it forward by helping someone who needs a hand. There will be a visitation on Sept. 23, 5 to 6 p.m. and a funeral service at 6 at Cape Ann Bible Church, Thompson Street, Gloucester. A collation will follow downstairs. Obituary published in the Gloucester Times.