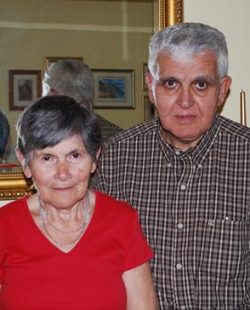 Berlangieri, Tullio of Revere passed away on February 20 after a long battle with Parkinson’s Disease. Tullio was born in San Mauro Cilento, province of Salerno, Italy to the late Beniamino Berlangieri and Maria Lembo. He was married to Filomena (Conte) for 59 years.Tullio was a cobbler/shoe maker. He and his father repaired and made custom shoes. Every Sunday they would board their German Army motorcycle with backpacks on their backs, full of shoes, to deliver and pick up. Everyone in the Cilento region knew them.In 1970, Tullio and his family immigrated to the United States. There they joined Tullio’s sister Maria and Filomena’s brother Domenic. During his early years he worked at various shoe factories in the Boston area. It was in 1980 that he decided to take over the cobbler shop on Revere Street, Revere. Tullio’s Shoe Repair served the North Shore communities for 33 years. He was a master of his trade, able to turn an old pair of shoes into new ones. Tullio was a vibrant person. People who visited the shop were always greeted with a smile and hello. As the Parkinson’s disease progressed he never complained and always said that he was fine. Tullio is survived by children Ben “Beniamino” Berlangieri and his wife Lisa of Peabody, and Maria Maida and her husband Larry of Peabody. Cherished grandfather of Michael Berlangieri and his wife Devi, Michelle Berlangieri and her fiancé Matt Carregal, and Angelo, Arianna and Anthony Maida. Adoring great grandfather of Vincent Berlangieri. He also leaves behind his brothers and sisters, Maria Conte and her late husband Domenic of East Boston, Lucia Kent of Peabody, and Giuliana, Teresa, Giuseppe “Peppino”, Luisa, Antonio “Tonino” and Paola Berlangieri all of Italy. Also survived by many loving nieces, nephews, and cousins. The family would also like to express their gratitude to Kevin Soares for taking such great care of Tullio. Funeral from the Paul Buonfiglio & Sons-Bruno Funeral Home 128 Revere St, Revere on Saturday February 23,2019 at 9am, Funeral Mass at St. Anthony’s Church at 10am. Relatives and friends are kindly invited. A visitation will be held on Friday from 4pm to 8pm. Interment Holy Cross Mausoleum. In lieu of flowers donations can be made to the Michael J. Fox Foundation for Parkinson’s Research, P.O. Box 5014, Hagerstown, MD 21741-5014.