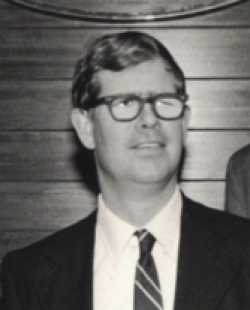 Samuel McC. (Mac) Goodwin of Revere passed away Sunday, February 17th after a prolonged illness. He is survived by his brother, Peter Goodwin and his wife Laurie of Walnut Creek, CA, his brother-in-law Richard Jackson and his wife Evelyn of Natick, and his brother-in-law Norman Jackson and his wife Valerie of Haverhill. Mac was preceded in death by his loving wife, Geraldine “Gerri” Goodwin (Jackson), his brother, Charles Goodwin and his father and mother Samuel & Christjane Goodwin. Mac was born in Fort Leavenworth, Kansas on May 5, 1950, the son of a career army officer. He was a graduate of the Perkins School for the Blind and later of Boston College where he worked for over 30 years at a rewarding career in food services until his retirement. Mac was inducted into the Carroll Society in 1986. An avid reader of history, Mac never failed to astonish with his memory for facts. A devoted Red Sox fan, Mac’s loyalty spanned decades. Growing vegetables and flowers, Mac had a lifelong passion for all things gardening. Above all else Mac loved family gatherings, celebrating holidays and living in his house by the ocean. The family will always be grateful for the exceptional and compassionate care given by the medical professionals and staff at Felberg 7, Beth Israel Deaconess Medical Center. Interment will be in Puritan Lawn Memorial Park, Peabody, MA on Saturday, February 23rd at 1:00pm. In lieu of flowers, donations may be made to the 7Felberg/Inpatient BMT Nursing Education and Patient Comfort Fund, sent to Beth Israel Deaconess Medical Center, 330 Brookline Ave. (OV), Boston, MA 02215.