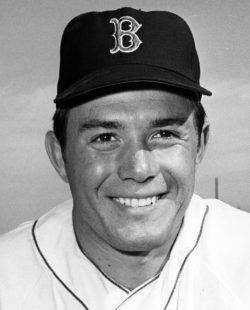 William M. “Billy” Conigliaro, of Beverly, formerly of Revere, on February 10, 2021 at the age of 73. Billy was born in Revere to the late Salvatore and Theresa (Martelli) Conigliaro. He was a graduate of Swampscott High School (Class of ’65), and immediately thereafter, at the age of only eighteen (18) years old, became the first ever draftee of the Boston Red Sox when he was drafted fifth overall in the first ever MLB First-Year Player Draft. He served his country in the US Army as a marksman rifle crewman, being posted at Fort Knox, in 1967, before beginning his lifelong dream of playing professional baseball for the local Red Sox. He played with the Red Sox for three years (two of which were with his brother Tony) before being traded to the Milwaukee Brewers. He finished his MLB career in 1973, winning a World Series Championship with the Oakland A’s. Billy was loved by all who knew him, and his passion and love of life were contagious and inspired others to pursue their dreams, just as he pursued his own personal dreams post-baseball. He enjoyed astronomy and photography, even opening his own camera and photography shop. He was also a skilled helicopter pilot, having obtained his pilot’s license and owning his own helicopter. However, one of his biggest passions in life post-baseball, was giving his time to children’s causes. Whether it was participating in baseball clinics for children, or giving his time by visiting ill children in the hospital, he was a loving individual with a heart of gold. He is survived by his loving wife, Keisha, of Beverly, whom he was married to for eighteen (18) years. Also among his survivors are his brother Richard Conigliaro; nephews and nieces Billy, Tony and Cayla Conigliaro, and Abby Ellis; and the Martelli Family. Due to the current restrictions with Covid-19 all services were held privately for the immediate family. In lieu of flowers, the family is asking for donations for the creation of a foundation dedicated to raising money for assisting underprivileged children to attend baseball camp. The fund will be established in Billy Conigliaro’s name sometime later on this year. If interested in donating, please contact his wife. Thank you. Keisha: billycfoundation@gmail.com.