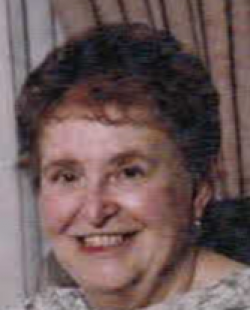 Roche, Mary (Foley) of Salem on June 24, 2018 at the age of 90. Born in Chelsea on April 16, 1928 to the late Michael and Julia (Gallant) Foley. Beloved wife of the late Joseph B. Roche. Cherished mother of Marie Roche of Salem and Barbara Roche of Salem. Adored grandmother of Julia Roche of Salem. Devoted sister of Robert Foley and his wife Carolyn Foley of Chandler, AZ, the late James Foley and his surviving wife Dorothy Foley of Swampscott, the late John Foley and his wife Flora Foley, the late William Foley and his surviving wife Mary Foley of Haverhill, the late Dorothy Young and her husband Thomas Young, and the late Mildred Coffin and her husband Roy Coffin. Also survived sister-in-law to Ellen Lynah of Swampscott and many nieces and nephews. Mary graduated from Immaculate Conception School in 1946 and continued her education at Salem State College, where she obtained her B.S. in education in 1950. While at Salem State, Mary was actively involved in the Newman Club, and she would ultimately proudly serve as president for two years. Mary taught third grade at the McKinley School in Revere for 37 years. She was quite a popular teacher among both students and parents, and many former students have recounted fond memories of holiday art projects, singing and dancing, special Friday afternoon activities, and the yearly field trip to Plymouth Plantation. During this time, Mary also returned to Salem State and obtained a M.Ed. in Reading in 1978. After retiring in June 1988, Mary because actively involved in the Immaculate Conception Parish, teaching CCD classes for 10 years and serving as an Eucharistic minister. She also was an active member of the Revere Retired Teacher’s Association and the Revere Woman’s Club. A visitation will be held at the Paul Buonfiglio & Sons – Bruno Funeral Home 128 Revere St, Revere on Thursday June 28, 2018 at 8:30am to 10:00am followed by a Funeral Mass at the Immaculate Conception Church at 10:30am. Relatives and friends are kindly invited. Interment Woodlawn Cemetery. In Lieu of flowers, please donate to Care Dimensions Hospice 75 Sylvan Street , Suite B-102 Danvers Ma 01923.