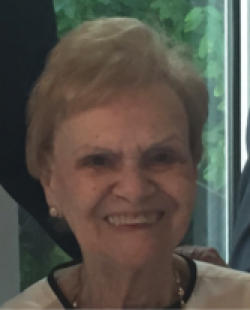 Errico, Constance “Connie” of Revere on May 11, 2018. Beloved wife of almost 60 years to the late Joseph Errico Jr. Born and raised in Westbrook, ME to the late Alphee and Laurette (Desroche) Martin. Devoted mother of Robert Errico and wife Roseann (Sardo) of Boxford, David Errico and wife Jane (Bidwell) of Rowley, Karen (Boomhower) Errico of Revere and the late Kenneth and Kevin Errico. Cherished grandmother of Nikola of Philadelphia PA, Christopher of Boxford, Ysabelle, Annalise and Daniel of Beverly and Meghan and Anthony Krenselewski of Lancaster and Erin of Rowley. Dear sister of Clifford and the late June Martin of FL, Olive and Richard Vargas of CA, Velma and the late James LaBrecque, Robert and Mignonne Martin and Carol and Larry Caron of ME. Loving cousin of Doreen and Armand Arsenault of Peabody. Adoring aunt of Janice, Jennifer, and Michael and the late Joseph Gazza of Revere, Vicki Mucci and Robert DeLeo of Winthrop, the late Karen Salvetti, Guy Martin of FL, Robin and John Sarno of AZ, Vicky and Stephen Giaquinto of SC, Chris and Jenny Vargas of CA, Cindy and Don Roy, Laurie and George McCallum, Patti and Tony Ellsworth, Robert and Nancy Martin, and Mark and Brenda Caron all of ME, and Michael and Sheila Caron of NC, as well as many great-nieces and nephews. Dear friend of Loretta Taibi of Revere, Mike and Rose Stasio of Atlanta GA, and Jerry Ruggiero of Danvers. After marrying Joe, Connie moved to Revere where she and Joe raised their family. Connie was a Cafeteria Manager for many years in the Revere School System. She will be sorely missed by all who knew her. A Funeral Mass will be held at St. Anthony’s Church on Tuesday May 15, 2018 at 11:00am (Everyone to meet directly at church). Relatives and friends are kindly invited. A visitation will be held at the Paul Buonfiglio & Sons-Bruno Funeral Home 128 Revere St, Revere on Monday from 4:00pm to 7:00pm. Interment Woodlawn Cemetery.