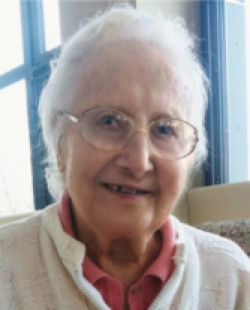 Edith F. (Dello Russo) Marra died peacefully Thursday morning March 1 at the Lighthouse Nursing Care Center in Revere, just eight days short of her 99th birthday. Edith was born March 9, 1919 and raised in Everett by her late parents John and Angelina. During World War II she worked in a facility that manufactured jackets for the military. In 1948 she married Robert A. Marra of Revere and resided in Revere for the remainder of her life. She lived for her family, and she went about her daily chores always singing a song and making sure everyone had all that they needed for their own daily adventures. She is lovingly survived by her son Benjamin John and his wife Donna of Lynnfield; son Robert A. Jr. and his wife Janine of Revere; grandchildren Julee and her husband Jeremie Cronin and great-granddaughter Emmi Dee of Peabody; Michael and his fiance Christine of Somerville; and her devoted caretaker Sandra Acquaviva of Revere. She was predeceased by her siblings Felix Dello Russo, Josephine Ferullo, Matilda Reppucci, Lena DeAngelis, and Michael Dello Russo. The family expresses its deepest gratitude to the people at the Lighthouse Nursing Care Center, where a caring and compassionate staff assured Edith’s contentment and comfort during the final year of her long life. Family and friends are cordially invited to visitation Sunday, March 4 from 2:00 p.m. to 6:00 p.m. at Buonfiglio and Sons Funeral Home, 128 Revere Street. Funeral services begin Monday, March 5, at 9 a.m. at the funeral home followed by a funeral Mass at 10 a.m. at St. Anthony’s Church, 250 Revere Street. In lieu of flowers, the family has requested donations in Edith’s memory be made to the Reid’s Ride, c/o First Giving, 175 Andover Street, Suite 101, Danvers, MA 01923 or to the Lighthouse Nursing Care Center, Third Floor Patients Activity Fund, 204 Proctor Avenue, Revere, MA 02151.