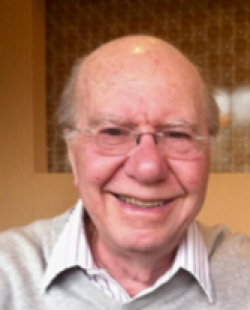 Dr. Adrian J. Costanza, an Orthodontist in Revere Massachusetts, passed away on Saturday February 10, 2018. The son of Mr. and Mrs. Carl Costanza, a Pharmacist in Revere, he attended Revere High School 1945 to 1949, while also studying classical piano and accordion and playing with local Big Bands in the area. He was known for his incredible rendition of “ Flight of the Bumble-Bee” on the accordion, and mastering the “Bellow” technique which very few players could perform. His scholarly and musical achievements granted him acceptance to the pre-med program at Boston College as well as a musical scholarship to the New England Conservatory. He chose the path to Dentistry, graduating with a Bachelor of Science Degree in 1953 from Boston College, and a Doctor of Dental Surgery Degree from Loyola University, Chicago, in 1957. At Dental School, he was President of the St Apollonia Dental Guild, a member of the Delta Sigma Delta fraternity serving as a senior page, and initiated into the Blue Key National Honor Fraternity. Upon graduating Dental School, he entered the U.S. Air Force at Wright-Patterson Air Base in Ohio and served two years as a Captain in the Dental Corps. He then returned to Revere to reside and open a Dental Practice right next to his new house where he and his wife, Revere High School sweetheart Barbara De Angelis, raised their two children Craig and Caren. The two, many years later, built their dream house in Swampscott, but always continued to maintain their relationships with family and friends in Revere. As well as practicing dentistry and fatherhood, Adrian also became a 4th degree Knight of Columbus, and a member of the St Anthony’s Holy Name Society, where they were also parishioners. While his son attended Sunday School at St Anthony’s, Adrian realized they were understaffed , and became the Spiritual Director and Principle of the Sunday School at the request of then Rev. Msgr. Guido L. Pollatta; donating over 20 hours a week of his time for eleven years of service and helping to build the program from a few hundred students to well over a thousand. He received an Honorary Award from then Governor Michael Dukakis for his dedication. Upon graduating from Loyola Dental, he had been accepted to their graduate program for Orthodontics, but decided to serve with the Air Force instead. Then, after 17 years practicing general dentistry, Adrian fulfilled his true passion by being accepted into the Tufts Graduate Orthodontics Program, becoming one of the oldest students to ever do so. Upon graduating in 1975, he then opened Orthodontic practices in Revere and Danvers, all the while maintaining memberships with the Massachusetts Dental Society, North Metropolitan District Dental Society, American Association of Orthodontics, and the North East Society of Orthodontics. He also had a love for bowling and was a member of several leagues, and known for his consistency and reliability in his scoring. His ultimate passion was his family; his older brother Carl and his late wife Lorraine and daughters Lorrie and Lianne; his younger brother Edmond and his son Guy, and his late son Joe, and wife Grace; his son Dr. Craig and wife Libby and their two boys Alec and Matthew; and his daughter Caren and her husband Steve D’Agnese, and their son Marco… the true “celebrity” of the family. Adrian loved “Brothers Night”, meeting with his brothers and family members once a month at different restaurants, and family gatherings where he would play piano and accordion with his grandsons, as well as a few games of billiards in between. He also mastered the art of wine making, producing a Cabernet and Merlot that quite impressed family and friends, as well as several restaurant owners in the area. Adrian met his beautiful wife Barbara in high school, where they became soulmates and will forever remain as one. A visitation will be held at the Paul Buonfiglio & Sons-Bruno Funeral Home 128 Revere St, Revere on Thursday February 15, 2018 form 9:00am to 11:30am followed by a Funeral Mass at 12:00pm at St Anthony’s Church. In lieu of flowers donations can be made to St. Jude Children’s Research Hospital, 501 St. Jude Place, Memphis, TN 38105-1905.