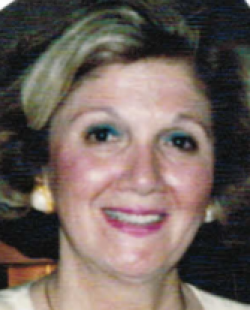 Born on the Fourth of July in 1932, Rita passed away at age 85 on January 22, after an eleven year battle with Alzheimers disease. She will forever be in the hearts and minds of her beloved children, Michael Pinksten and his fiancée Gina White of Chester NH, Sharon Pinksten and her fiancé Mark Williams of Chelsea, MA, Steven Pinksten of Chelsea, MA and Jim Pinksten and his fiancée Shauna Mulcahy of Everett, MA; her adored grandchildren Alanna and Michael Sokoloski, Erik Haywood, and her great-granddaughter, Natalia. Rita was the cherished daughter of Daniel and Albina (Domenichiello) Camarot and grew up in Chelsea with her late siblings, Daniel and Mildred (Tucci). She married her childhood sweetheart James Pinksten in 1951 and together they raised their four children in Chelsea and Revere. Rita had a strong love of Boston which started with her first job as a saleswoman and hand glove model at RH Stearns department store. In later years, she worked at Leonard Silver Mfg. Co and the law firm of Goodwin Proctor and Hoar. Rita enjoyed talking about the many memories of the friends and colleagues she made over the years. After her marriage to Edward Eriesian in 1990, Rita resided in Lynn, MA, where she enjoyed travelling to Las Vegas and Florida with her lifelong friends Margaret and Bob Spinney and cousins Peggy and Ken Greene. What brought Rita the most joy in life were her children and grandchildren who have sorely missed spending each and every holiday at her home, her daily phone calls providing weather and traffic updates to start their day, and Sunday dinners at her house where she served chicken cutlets that no one has been able to make as well as she did. We will be forever grateful that it was she who was our Mother and Grandmother, who with her grace, kindness, compassion, and unconditional love taught us the true meaning of the love of family. Her family would like to extend their gratefulness to the caregivers at both Prospect House Assisted Living and Memory Care and the Lighthouse Nursing Care Center in Revere, MA for the wonderful care they provided to her over the past nine years. Funeral from the Paul Buonfiglio & Sons-Bruno Funeral Home 128 Revere St, Revere on Friday at 10:00am followed by a prayer service at 10:30am in the funeral home. Relatives and friends are kindly invited. A visitation will be held on Thursday from 4:00p to 8:00pm. Interment Woodlwan Cemetery.