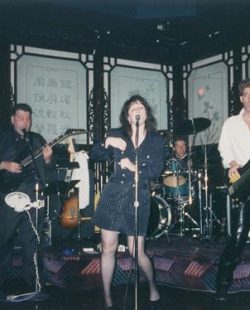 Our good friend Theodore (Teddy) Palmisano sadly passed away on December 16th, 2017 at Tufts Medical in Boston. Teddy was born on January 17th, 1952 to the late parents of Mr. and Mrs. Theodore and Roselle Palmisano of Revere, Massachusetts. He was a talented Artist, Musician and good friend to all that knew him. He was the owner of the Music Gallery Store from the late 80s to early 90s originally founded on Broadway in Revere, Mass. In addition, he founded or was a member of such great bands as: Pot of Gold, Hot Ice, Metro, Breakaway, Vanilla Phunk, Jumpstart, Live Wire, Quick Bird, Black Pearl, Power Glide, Inclusion, and many others. He had such a deep understanding and professional touch in teaching Guitar and repairing them as well; having worked at Parker Guitars at one time as a Tech in Wilmington, Massachusetts. Teddy’s band “Metro” was a hot-act in the early 80s in Florida touring the whole state for almost two years playing six nights a week. Music was his life, not only was he a great guitar player, but he had a beautiful voice and was equally talented on bass as well as guitar. In addition, he wrote such great music as “The Girl is Good” with Gary Gerard Soriano off the 1989 Album “Say no to drugs”. Teddy was very original in his music as well as performing cover music as a Professional Musician. Theodore, will sadly be missed and loved as he was such a gem of talent that passed away to soon. We love You Teddy! Funeral from the Paul Buonfiglio & Sons-Bruno Funeral Home 128 Revere St, Revere on Friday December 29, 2017 at 11:15am followed by celebration of life at 12:00pm. Relatives and friends are kindly invited. A visitation will be held on Thursday from 4:00pm to 8:00pm.