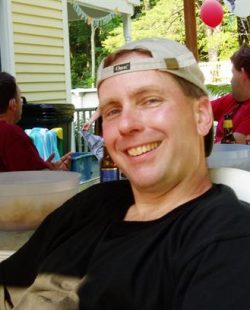 William J. “Bill” Hill Jr. of Rowley formerly of Revere passed away peacefully at home on August 1, 2017 surrounded by his loving family. Beloved husband of Karen (Kapamagian) Hill, whom he shared 30 years of marriage. Devoted father of Ian W. Hill of Rowley, Alexandra J. Plante and her husband Christopher of Newburyport and Mathew S. Hill of Arizona. Cherished son of Eleanor (Cronan) Hill of Lynnfield and the late William J Hill Sr. Dear brother of Michael Hill and wife Nancy of Marblehead, Diane Hanley and husband Gerry of Quincy, Susan Griffin and husband Michael of North Reading, Kevin Hill and wife Mary of Danvers, and Maureen Buxton and husband Eric of Georgetown. Also survived by many adoring nieces and nephews. A native of Revere, Bill was a gifted student and elite athlete, breaking school records and winning Greater Boston League championships in indoor and outdoor track. Bill was a 1981 graduate of the University of Massachusetts (Amherst) where he continued to compete successfully in athletics and distinguish himself as a student. Bill later received an MBA and Law degree from Suffolk University. He had a long and successful career in the banking and financial services industry. Upon graduation from UMass, Bill joined Bank of New England where he quickly rose through the ranks, recognized for his tireless work ethic, dedication and keen intellect. A Vice President in BNE’s Capital Markets Group and, upon the bank’s acquisition by Fleet Financial Group, he became a Senior Vice President of Fleet’s Recoll Management Corporation, an entity which he helped to create and manage. Bill later spent a number of years as a Managing Director in Fleet’s Capital Markets area where he developed recovery plans for distressed assets in secondary markets. He finished his career in the private equity arena, where he continued to focus on acquisitions, turnaround opportunities and special situations. Bill was a retired member of the Massachusetts Bar Association and a former treasurer of the Rowley Public Education Fund. Easy going, pragmatic, loyal and accessible, Bill had a vast array of friends from different backgrounds. He was sought out by colleagues for advice and counsel and was always willing to help others in navigating and advancing their careers. His great loves were his family, his dogs and spending time with friends. He is admired for his incredible courage and we will miss his friendship, quick wit and easy smile. The family would like to thank Compassus Hospice for their care and kindness, with special recognition to Dan, Kaitlyn and Paula, as well as Christy from Right at Home. A memorial visitation will be held at the Paul Buonfiglio & Sons-Bruno Funeral Home 128 Revere St, Revere on Sunday, August 6, 2017 from 2:00pm to 6:00pm. Private Interment will be held at a later date. In lieu of flowers donations can be made in William’s name to the Alzheimer’s Research Foundation, 3152 Little Rd Suite 146, Trinity, FL 34655.