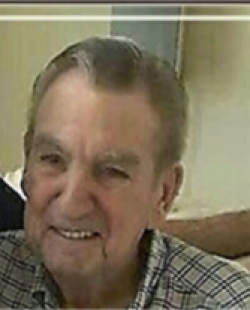 John Joseph Patrick Hourihan 90, of St. Petersburg, FL, passed away on July 20, 2017 at Sun Coast Hospice Palm Harbor, FL. John was born on March 17, 1927 in Boston, MA to the late Virginia (Bishop) and John Hourihan of Somerville, MA. He was predeaceased by his wife Gilda (Capozzi) in 1992. During their marriage, John and Jill made their home in Marlboro, MA for many years. He was also predeacesed by his sister Marion Weisinger in Nov. 2012, and his brother Donald in Nov. 2005. John is survived by his wife Louise (Fimlaid) of Clearwater, FL; his daughter Deborah Ceccarini of Charlton, MA; his son Kevin Hourihan and wife Patricia (Holland) of Raleigh, NC; his sister Eileen McCarthy of Woburn, MA; his grandaughters, Nicole Brown of Charlton, MA; Lisa Ceccarni of Jamaica Plain, MA; and Jillian Hourihan of Raleigh, NC; his grandson Hogan Hourihan of Mesa, AZ; along with a host of neices and nephews. John was a Navy Veteran and served in WWII on the USS Bon Homme Richard aircraft carrier. He graduated from Fisher Business School and went on to enjoy a career in executive management. In his later years, John relocated to St. Petersburg, FL . There he embraced the climate and wildlife of Florida, as well as the beautiful sunsets over Boca Ciega Bay, which he very much enjoyed from the views of his own living room windows. His passions were his family, debating politics, sports, and live music (especially jazz and the Big Band Era). He also had an avid love for broadway plays, old movies, reading, and his daily crossword puzzles. Although John became a Floridian, he never lost his love of Boston and Somerville where he grew up. All services were privately held.