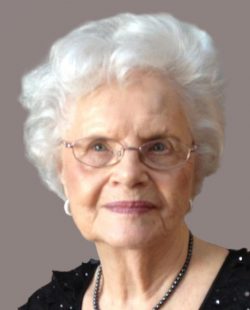 Anne Marie (Nelson) Boyce of Malden passed away on December 19 at the age of 96 after a long battle with Alzheimer’s disease. Born in Eliot Maine, Anne was the beloved wife of the late Charles F. Boyce of Malden, sister of Frances Leyva of Lyndeborough NH, mother of Jack Boyce of East Boston and his husband Stewart Landers, the late Linda Boyce of Woburn and her wife Cheryl Volpe of Winter Haven FL, James Boyce of Malden and his former wife Karen Boyce of Stoneham, Steven Boyce of Manchester NH and his wife Annette, and Michelle Tuttavilla of Lynn and her husband Michael and former husband the late George Smith. Anne is survived by her grandchildren Michael Smith of Lynn, Rachael Manfra of Manchester NH, Laura Dreimiller of Ballston Spa NY, and Lisa Boyce of Manchester NH, her great-grandchild Julie Manfra, and the many nephews, nieces, friends and acquaintances who will miss her greatly. In accordance with the family’s wishes, funeral services will be private and held at Buonfiglio Funeral Home in Revere. Anne will be laid to rest alongside her husband Charlie at Forest Dale Cemetery in Malden. Although we cannot gather together to mourn during these difficult times, friends are encouraged to offer their condolences and support by visiting Buonfiglio.com to leave a message or share a photo or special memory. In lieu of flowers, donations may be made to MSPCA at Nevins Farm, 400 Broadway, Methuen MA 01844.