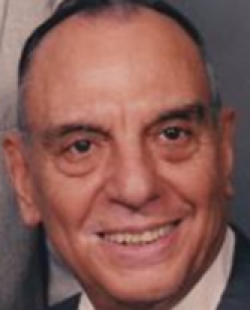 DeAngelo, Philip of Revere and formerly of the North End of Boston was born on February 14, 1920 and passed away at the age of 96 on December 15, 2016. Beloved husband of Antonina “Nina” (Manganaro) for 69 years. Devoted father of Frank DeAngelo and wife Linda of Revere, Philip DeAngelo of Revere and the late Phyllis Binda. Dear brother of Mary Bianco and husband Vincent of Medford, Carmella Meehan and husband John of Saugus, Charles and wife Lucy of FL and Domenic of FL. Cherished grandfather of Michael, David, Stephaine, and Alicia. Also survived by 5 loving great grandchildren and many nieces, nephews, and cousins. Philip attended South Boston high school in their sheet metal program and worked at the Boston Naval Shipyard as a sheet metal worker. He then went on to serve in the United States Army during WWII for the Army Signal Port Service Company. After returning from active duty he worked at the Boston Naval Shipyard as an electronics technician on radars, communications equipment, and jamming friend or foe equipment. Was on the Missile Command as procurement quality and a representative for the Hawk Missile Program and Patriot Missile “Research and Development.” Philip worked on Defense Contracts Administration Service as a procurement quality assurance representative related to Aircraft Engines. He then went on to work for Rockwell and Boeing Aircraft Companies as a procurement quality assurance specialist related to the B1-Bomber aircraft program, air bus and other military aircraft. Philip was a member of the VFW post 2346 in Saugus, the American Legion post 0061 in Revere, and the Knights of Columbus Council # 105 in Malden. Philip will be deeply missed by his family and friends. Philip was closely involved with the upbringing of his children and grandchildren. He constantly emphasized the importance of education. Family was the most important part of his life. Always putting family members first ahead of himself. Philip enjoyed playing the guitar and keyboard. He wrote several songs about family members. Funeral from the Paul Buonfiglio & Sons-Bruno Funeral Home 128 Revere St, Revere on Tuesday December 20, 2016 at 8:00am. Funeral Mass in St Mary’s Church at 9:00am. Relatives and friends are kindly invited. Visitation will be held on Monday from 4:00pm to 8:00pm. In lieu of flowers, donations can be made in Philip’s name to The Home for Little Wanderers, 10 Guest St, Boston, MA 02135. Entombment at Holy Cross Mausoleum.