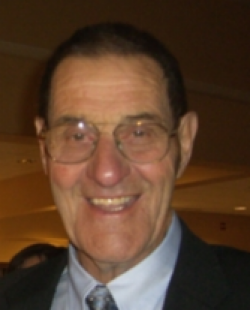 Errico, Joseph Jr. “Joe” 83, a Lifelong resident of Revere on August 17th, 2016. Beloved Husband of 59 years to Constance “Connie” (Martin). Devoted father of Robert and his wife Roseann (Sardo) of Boxford, David and his wife Jane (Thomassen) of Rowley, Karen Boomhower) Errico of Revere and the late Kenneth and Kevin Errico. Dear brother of the late Gerald, Ralph and Albino Errico and sister Marie Gazza. Loving Uncle of Vicki Mucci and Robert DeLeo of Winthrop, and Janice Gazza of Revere. Beloved brother-in-law of Cliff and June Martin of FL, Olive and Dick Vargas of CA, and Larry and Carol Caron, Velma Labrecque and Robert and Mignonne Martin all of ME. Cherished grandfather of Nikola and Christopher Errico of Boxford, Ysabelle, Annalise and Daniel Errico of Beverly, and Meghan and Erin Thomassen of Rowley. Also survived by many loving nieces, nephews and cousins. Joe is a Veteran of the United States Navy where he served during the Korean Conflict. He was a founding member of the VFW Mottolo Post in Revere. Joe is a retired Revere Police officer. Funeral from the Paul Buonfiglio & Sons-Bruno Funeral Home 128 Revere St., Revere on Tuesday August 23rd at 10:00am. Funeral Mass at St Anthony’s Church at 11:00am. Relatives and friends are kindly invited. Visiting hours will be on Monday from 4-8pm. In lieu of flowers donations could be made in Joe’s name to Dana Farber Cancer Institute, P.O. Box 849168, Boston, MA 02284. Interment Woodlawn Cemetery.