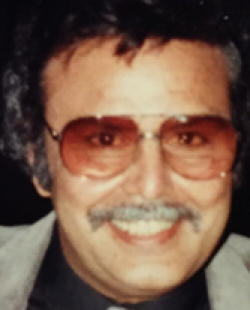 Ferullo, Carl A. of Saugus, formerly of Revere, on May 30th. Beloved son of the late Orlando and Angelina (Tempesta). Husband of Carol (Morgan) of Everett. Cherished father of Cindy Tuton and her husband John “Buddy” of Everett, Tracey Boyd of Everett and the late Kenneth “Kenny” Ferullo and his wife Mary. Loving grandfather of Michael Tuton, Melissa Tuton, Richie Boyd and his wife Stacy, Ryan Tuton and his wife Erica, Anthony Ferullo, Kenny Ferullo Jr. and his wife Susie, Katie Tuton, Angelina Ferullo and the late Robert “Robbie” Boyd and seven great-grandchildren. Dear brother of the late Dorothy DuPont. Also survived by many nieces and nephews. Carl was a lifelong member of the D.A.V. and the American Legion. He served in the United States Navy, was a lieutenant of the Everett Police and spent 37 years as an officer. He enjoyed his job and took pride in serving the community. Funeral from the Paul Buonfiglio & Sons-Bruno Funeral Home 128 Revere Street, Revere on Monday, June 6th at 9:00 a.m. Funeral Mass at the St. Anthony’s Church at 10:00 a.m. Relatives and friends kindly invited. Visiting hours will be held on Sunday from 2-6 p.m. Interment at Woodlawn Cemetery.