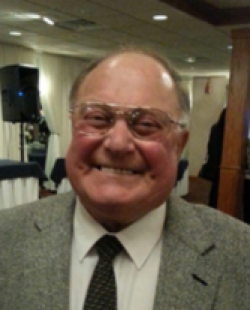 PENTA, Ralph of Malden, MA passed away on April 6, surrounded by his loving family. Ralph was born in 1937 in the town of Sant’Angelo all’Esca, Italy, and was the son of Maria and Ciriaco of Everett. He immigrated to the United States in 1955, settling in Massachusetts with his beloved wife of 56 years, Lina (Rosato) Penta. Known by many as “Ralph the Barber,” he had an unparalleled work ethic and built a thriving business in Chelsea Square where he groomed so many for over 50 years. He was an avid follower of horse and dog racing, a passionate fan of the Boston Red Sox and when not in the barber shop or at the track, could typically be found taking meticulous care of his home and lawn. His motivation for all he did was his family, who he supported, nurtured and loved deeply every day of his life. Some of his happiest moments were when sitting at the head of the table, with his wife next to him and surrounded by his children and grandchildren. He is survived by his loving wife Lina, and his three children, son Charles and wife Susan (Loconto) of Belmont, son Joseph and wife Marjorie (Hart) of Tewksbury and daughter Mary Ann (Penta) Cutler and husband Scott Cutler of Medford. He is also survived by his six grandchildren, Alexandra and Victoria Penta, Joseph, Estelle and Maggie Penta and Mikayla Cutler as well as his two brothers Michael Penta and his wife Antoinette of Chelsea, and Peter Penta and his wife Connie of Everett and many nieces and nephews. Visitation will be at Buonfiglio Funeral Home in Revere on Sunday April 10 from 2:00 – 6:00 p.m. A funeral service honoring his life will be held in St. Joseph’s Parish, 790 Salem Street Malden, MA on Monday April 11 at 10:00 a.m. Relatives and friends kindly invited. Interment will be in Woodlawn Cemetery, Everett, MA. In lieu of flowers, expressions of sympathy may be made in memory of Ralph to the Arthritis National Research Foundation, 5354 E. 2nd St., Suite 201, Long Beach, CA 90803 or www.curearthritis.org/donate. For online guestbook, please visit www.buonfiglio.com.