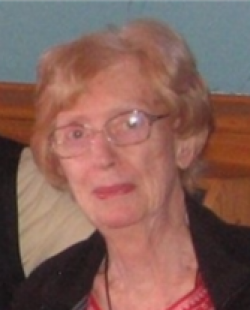 Patricia Ann Sartorelli, a long-time resident of Revere, died on April 2nd at the Brudnick Center for Living in Peabody following a brief illness. She was 84 years old. Born and raised in Lynn, MA, Patricia was the daughter of the late John and Gertrude (O’Brien) Buckley. Her father was a Secret Service agent for the grandchildren of FDR and Patricia, as a child, would play with the Roosevelt grandchildren during her childhood summers on Long Island. Patricia was a member of the Lynn English High School, Class of 1950, and attended Salem Teachers’ College. She worked for the Prudential Insurance Company before her marriage. In 1958, she married Anthony Sartorelli, a Korean War veteran who worked for the New England Telephone Company. It was this role as wife, homemaker and, ultimately, a mother, which she was at her happiest. After her husband’s death in 1984, Patricia worked for the New England Telephone Company, Salem State College and then Liberty Mutual, from which she retired. Patricia loved to travel and, with her daughters, saw most of the United States, including Hawaii and Alaska. She went white water rafting, rode a mule in the Grand Canyon and hiked around the perimeter of Devil’s Tower in South Dakota. She then set her sights globally and explored Ireland, Italy, the United Kingdom, Greece, Austria and France. She sailed down the Danube, visited Notre Dame and stood in front of the Acropolis in Greece. Through her daughters, she became active in Salem State University. She enjoyed its Speaker Series and met many of its guest lecturers. Patricia also joined in many of her daughters’ alumni events there. Patricia loved family holidays, especially Christmas with her daughters. One of their favorite memories of their mother is her opening presents one by one in turn with them with all the excitement and wonder of a child. She was the devoted mother of Pamela (Sartorelli) Doherty and her husband, Stephen, of Brockton, Deirdre Sartorelli and her partner, Linda Brodeur, of Cape Neddick, Maine and the late Adrienne Sartorelli. She is also survived by several friends who enjoyed her good humor and strength. Funeral from the Paul Buonfiglio & Sons-Bruno Funeral Home 128 Revere St, Revere on Thursday April 7th at 9:00 am. Funeral Mass in St Anthony’s Church at 11:00 am. Relatives and friends are kindly invited. Visitation will be from 9:00 – 10:30 am. Interment will be in Woodlawn Cemetery.